I Saw The Devil Run For President


I saw the devil run for president
& I ran


Images On A Screen


Confessions Of An american Outlaw #473
(Transmissions For Amiri Baraka #7)


I was living in Philly
Some stuffy jewish law student mother fucker
Would get in my face every day
Because he knew you were my favorite Poet
Telling me how they were going to run you out of your Poet Laureate roll
He wanted to crush you, I could see the hate in his eyes
He didn't even know you, he knew what he was told
He probably never even read the Poem
When it was all over, & you were out, he joked about it
Said when he was elected governor
He would appoint me as Poet Laureate
I told him Don't you ever do that

Bio: Michael D. Grover is a Florida born Poet that currently resides in The Old West End of Toledo, Ohio trying to get as far north as he can. Michael has been publishing and performing Poetry for nearly twenty years and has been published all over the World. Michael published many of the best underground Poets in the country while he ran Covert Press. He has published over a dozen chapbooks over the years. His first collection of Poems will soon be available from Citizens For Decent Literature Press. Michael is the current Head Poetry Editor at Red Fez. In 2015 Michael published his first novel Lockewood/The Wolves Of Lockewood. He is soon to publish his next novel Heavy Metal. 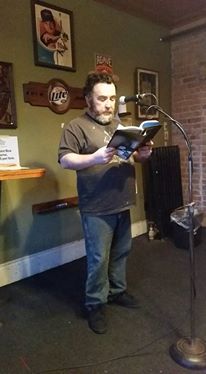