I had just arrived back in Wales.
I was sitting alone in a bar in Neath
enjoying my first pint in quite sometime.
When over walked this guy I knew,
in fact I used to be in school with him.


“Alright mate?” he asked with a smile.
“Where have you been, I haven’t seen you in ages?”


“I’ve been over in Gloucester!” I answered.


Instantly he lost his smile
and replaced it with a frown.
“Never forget you’re Welsh!” he stated twice
and then quickly walked away.


A Poem, A Mirror, Three Dogs & An Arsehole


He entered the room,
looked at the mirror,
saw the poem that I had pinned there,
then sat down.
He looked anxious, nervous, angry and paranoid
but he also looked about to cry.
I just sat there drinking,
staring straight into his soul.
My eyes screamed
“Go on, you cunt!
I’ve thrown the first punch,
that poem was a punch and a headbutt
all rolled up into one!”
I had him by the balls
and I hadn’t even touched him.
I was three steps from the move
and I hadn’t left my seat.
Suddenly he lunged forward.
I whistled.
He took two steps towards me and screamed.
My first dog was on him.
Before he hit the floor my second dog was on him.
Then my third dog hit him like a fucking drugs bust.
I stood up and yawned,
Spat a mouthful of beer over his wriggling body.
then I went to the fridge to get another beer.
when I came back he had one of my dogs by the throat.
Another was chewing the middle of his back.
The third was licking up the mouthful of beer
that I had spat.
It was puddled on his calf,
where his jeans had pulled up past his socks.
I walked over and laughed insanely.
Pulled my dick out
and pissed over his face.
my dogs stepped away from him.
He turned onto his hands and knees,
choking and gagging.
I was still pissing over him.
Then he looked up and saw the open window.
he made a try for it.
I let him.
He had gotten the message.
That was the last time he came around
asking me to show him how to write poetry.


Bio: Paul Tristram is a Welsh writer who has poems, short stories, sketches and photography
published in many publications around the world, he yearns to tattoo porcelain bridesmaids
instead of digging empty graves for innocence at midnight; this too may pass, yet.
Buy his books ‘Scribblings Of A Madman’ (Lit Fest Press)  http://www.amazon.co.uk/dp/1943170096
‘Poetry From The Nearest Barstool’ at http://www.amazon.co.uk/dp/1326241036
You can also read his poems and stories here! http://paultristram.blogspot.co.uk/ 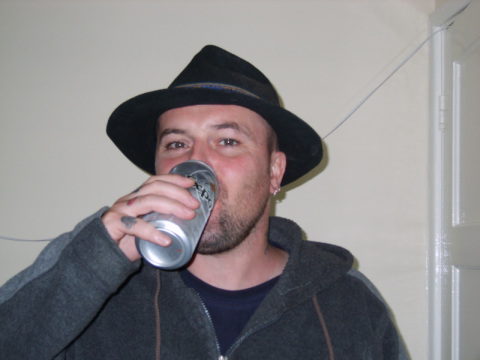