tonight that chimes
across our chasm; then delight


altared in a veiled moment
rushed and coupled by ennobled vaults,


the priest, wanton, rails behind the host
indulgent behind his religious screen


spit on your shapeless creed.


Once there was a weighting for a capital life,
there have been many, in the sound of a key behind
footsteps on the concrete stairwell while
I am waiting on the tower block escape.


There is a need and will to unclip wings
tolerance does not believe in acceptance here
because there, in the mind, is the realm
as beautiful as the bodega barrels punched in some
Spanish no tomorrow’s bar
down from the sound echoing away now
clutched to the hand rail
snake into the pram and tip-bin cellar.


There is a chance and ambiguity
fates, reminders and remainders of a love gone past
but there must be a way to capture what is now
already and go the way to beatification of the soul
as if there was a chart strangling me.


What happens when clouds laugh at you
and I’m back to the old tower where I
cool a brain babbling in a red medium
lungs clouded with smoke,
a hand that trembles like a graphomane,
those repeated chords like a stuck gramophone
playing over and over all through the night
a disgust, a search for a resolution
is it from the heart, brain or gut?


I need mercenaries to fight this war
like the ones on the TV news
but I revert to the status quo
to seek a truth that hides
in a book, a word, or smile


… but woken up in some yard
ward or flat these very symbols
wait by day with yellow-brown teeth
of black dogs under the laburnum
(yellow, leafless in the spring grass)
snarl under the kissing gorse and poison tree
behind the shadow waits for a telling sign
I rush around the corners into a pastel grid
of acacia and magnolia streets
still looking for you carpeting
a fright filled footfall
back to our district where
every house is a museum of follies
looking blindly for a harbour which I
can claim for an even hour
which becomes the map for the next day
and the only way out is frantic chiseling. 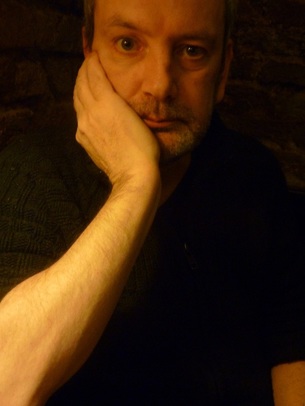