I stop to watch this homeless guy lying down
with his back against a garbage can on the sidewalk
of one of the busiest areas in downtown San Francisco.
Alternating between forefingers, he picks out boogers
which he proceeds to wipe on the sidewalk. The expression
on his face is almost orgasmic. His eyes are half closed
and his lips seem to be offering gentle kisses to some
imaginary goddess. I continue to watch him while trying
to imagine what it must feel like to no longer care what other
people think, or for that matter even be aware of their presence.
After cleaning out what appears to be all that remained
inside his nose he completely shuts his eyes, and making
himself as comfortable as possible, he now appears ready
for a nap. He looks completely at peace with himself,
unlike most of us passing by who have some place
that we have to be—but don’t really want to be there. . .


I’m riding a stationary bike at my gym
flipping through Entertainment Weekly
when I realize that of the 100 or so faces
that my eyes took in, I recognized only 4 or 5,
and with that I reflect that this says something positive
in that I no longer waste my time trying to keep up
with the latest singers, actors, and television personalities--
that I don’t care if I ever see their movies,
watch their television programs,
or listen to their songs.
And as I continue to peddle, I drop the magazine to the floor,
realizing later that some beads of sweat have fallen onto the cover.


M.J. Shineface has published 121 novels and 108 collections
of short stories, but she is mainly a poet whose work has appeared
in 9,953 magazines and anthologies including the Luna Buna Review,
and the Octo Puss Report. She’s won the Pushcunt Prize 61 times
and been the recipient of a Guga Guga Heim Award 45 times.
She’s also won the Putzler Prize 31 times, the Pen/Fuckher award
for fiction 27 times and the Booger Prize 24 times. She is presently
a full professor of Passing Gas at Up Your Ass University and a mother
of seventeen illegitimate boys and girls ranging in ages from 7 months
to 73 years. When she has free time she likes to play Pin The Tail On You--
if she can find you. . . 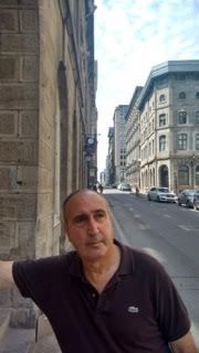